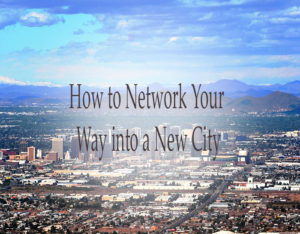 I never thought that I would spend so much time on social media but after reading Michelle’s book The 11 Laws of Likability I actually saw how to use it for networking my personal life. I reached out in a way I wouldn’t have thought about before and it paid off.

Moving to a new city is hard, moving there and not knowing anyone is even worse. Before I left Minot, ND to move south for the winter, I reached out to a few different people. I had a job in Minot with Victoria’s Secret and was able transfer to Mesa with the same company. Luckily one of the managers had a brother that was stationed in Minot; she had been to visit a few times so knew just what I was moving away from. She made sure to get my personal number and reached out to me a few times before I moved down to see if there was anything she could do to make my move a little smoother. She found out my interests outside of work, such as film making and photography and set me up with one of the other girls that worked at the store who happened to be going to school for film. We hit it off right away and I was able to meet a lot of people in the film industry down in Arizona through this one girl. I never thought about networking before I moved, until now.

Things to consider when networking in a new city:

It is scary moving to a new city, learning a new way of doing things and starting over, but it doesn’t have to be as hard as it once was, social media makes it a lot easier. Network, reach out, and allow people to reach back.

Christine Morse is the owner of ChristineMorseVA.com an online Virtual Assistant business where she loves being able to help people reach their goals and dreams while still having time for the simple things in life. She is an avid photographer with a flare for the dramatic in my art and loves to bring that to her business.