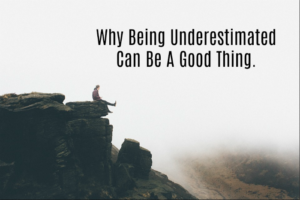 I had a thought recently that may surprise you: Being underestimated may be a good thing.

I know this seems to contradict my typical messaging and popular belief. People battle with being underestimated for many different reasons. Being too young or too old, or being of the wrong gender or background.

Perhaps it is unconscious bias or simply a mindset that we fight against, willing people not to make assumptions that minimize our abilities (in their minds). But, are there advantages of being underestimated that we are overlooking?

I had two counts against me when working on a trading floor in my finance days; I was a petite woman. And the only woman at that! I was once at a global conference and as the only woman in the room was asked to get coffee – yes it was the 90’s!

To the man’s surprise I said, “I don’t drink coffee, but thank you for offering.” And then went back to reviewing the agenda. He didn’t know what to do with that, but he never asked me again.

Sometimes giving people a response they don’t expect can jolt them to a new reality, and they have to re-estimate you.

I can’t count how many times people have come up to me at the end of one of my talks and said, in a surprised tone of voice, “Wow, you’re really short!” My response is always, “Thank you!” with a smile, (as if I didn’t already know I was 4 foot 10 and a quarter).

I’m wearing very high heels in all of these, and in one of them I’m even standing on a stair!

What this recurring interaction says to me is that I surprise them. Surprising people can be a great advantage.

At one of my most recent talks, a gentleman in the audience didn’t even wait until the end of the program to call out the fact. At our first handshake his astonishment was obvious with, “You look much taller in your videos!”

I cracked up and referenced him during the talk on branding. Well, he loved that too, which led him to write a post entitled “95 Pounds of Dynamite.” (He underestimated my weight, too – thank you!)

When someone underestimates you, they are giving you an opportunity. They have no high expectations of what you can bring to the table, and the element of surprise that you are able to deliver makes people pay attention.

Don’t let underestimation silence you. Exceed their expectations, and surprise them with who you are.