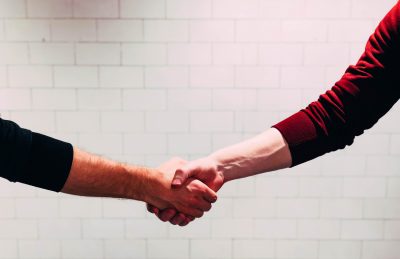 Last week I sent out my final Convention Connection video, but I have one more convention-related story to tell…

When I was writing my book, (now called The Connector’s Advantage – will explain that later) the name Robbie Samuels kept coming up. I heard from three different people, “You should talk to Robbie.” So I asked for an introduction.

We connected, and then we connected. Robbie rocks! He contributed to my book and inspired a section called How To Be An Inclusive Networker.  And at the NSA convention, I got to meet Robbie in person.

What happens when Connectors connect? Lots! Besides Robbie contributing to The Connector’s Advantage, he also invited me to be on his podcast. I then connected him to a few other people he wanted as guests on his show, and… and… and… the connecting continues.

One of the most important lessons I’ve learned and teach in networking is to give to give, not just to get. I was not seeking opportunities from Robbie when I met him, I was just open to figuring out more about him and what makes him tick. Through curiosity, I found out how much we thought alike and invited him to be in my book. It was not a quid pro quo to be on his podcast — that was just what naturally ensued.

You can listen to the episode here. Robbie and I had a great conversation where I realized that the behaviors I had in high school and camp growing up already showed the mindset of a connector. Little did I know!