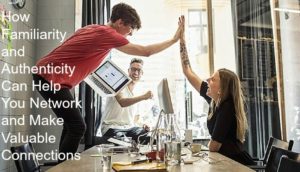 I was at a conference once and noticed a man whose name tag identified him as being with a company that sounded very familiar to me. Then I went up to the man to introduce myself, mentioning the name of the partner I knew at his firm (the law of similarity on my side). He seemed only lukewarm to my efforts, so after a brief conversation I didn’t push it further.

About six weeks later we ended up at another conference together, and this time we were introduced by a mutual friend. He was a bit friendlier than he’d been when we first met, and he remembered our earlier encounter, but he still maintained his distance and didn’t reciprocate my effort to deepen the connection. Over the next few months our paths continued to cross, and each time we ran into one another he’d be a bit warmer. By the time we ended up speaking on the same panel a year later, he was all smiles. It was the law of familiarity in action: People feel comfortable with who and what they know.

The man took a long time to let his relaxed, warm side come through. At first, I was an unknown entity. And even though we had a common friend, he needed more of a connection for there to be trust and comfort between us. People tend to be most comfortable with the people and things they are familiar with.

Think about Super Bowl commercials: Why are advertisers willing to pay a million dollars to run a spot during the show? The answer is that so many viewers will be watching the Super Bowl and the commercials generate so much post show buzz that even the names of companies with mediocre commercials will be mentioned again and again, increasing familiarity.

There is, of course, a fine line between keeping your name in people’s minds by building positive associations, and barraging them to such an extent that they tune you out. The key is to build familiarity in an authentic way. Authenticity, as we’ve seen, applies across the board with likability. Reach out in the spirit of connection, not in a narcissistic attempt at blatant self-promotion.

Living an authentic life is something that I feel strongly about. Not only does it help you as a person, but authenticity and positivity will always do you favors in the world of business.