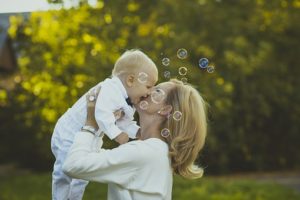 Are You Being Nosy Or Showing Interest?

I am sometimes criticized for being direct and blunt. Sometimes I am even called nosy. I suppose it is all true but I prefer to think about it as curious, interested, and just part of who I am.

I have a friend who I was of course asking all sorts of questions to about her daughter who has medical challenges. I stopped a half dozen questions in and asked, “do you mind me asking?” Her response was, “No. Thank you for asking!”

Her response surprised me but also made me even more curious. After she explained it to me I asked her to write it for all of you. Her words are below and she offers a great perspective to think about as we interact with others. What do you do when faced with those different from you?

Go Ahead, Ask Me What’s Wrong with My Kid

Why don’t people talk about the ‘elephant in the room?’ I have been thinking about this question a lot lately – ever since I became that elephant.

I am the mother of a charming two ½ year old girl who happens to have special needs; lots of them. She is visually impaired, is fed solely through a feeding tube that runs 15 hours a day and she still cannot sit, crawl, stand, walk or talk (she gets a few words out from time to time, but nothing consistent).

I know, this is very ‘un-parent of a child with special needs-like’ to start off the conversation with all of my daughter’s issues, but the reality is if you were to meet us, these are the things that you would notice first (hence, the elephant in the room). Yet most people won’t ask about or even acknowledge any of it. I don’t really blame them. It’s definitely an awkward conversation. But I know that because people don’t take the first step and ask questions like, “Do you know what she sees?” or “What’s that tube going into her belly?” we never get to the part of the conversation where they learn that my daughter understands everything that is said, that she’s wicked smart and has a devilish sense of humor (just like her daddy).

I know that people are just trying to be polite. No one wants to intrude or make me uncomfortable, but all this ‘politeness’ is lonely. Having a child with special needs often feels like you’ve been dropped off on another planet where only doctors and therapists and hospital stays exist. It actually feels good to talk about what’s going on. It feels good to connect with people and share the good stuff, the bad stuff, the scary stuff and everything in between. And if you catch me at a time when I don’t want to talk about any of it, I’ll just say so. But I wouldn’t be mad that you asked.

Keep in mind, though, that there is a time and place for these conversations. I remember being at my niece’s birthday party a year ago and one of my brother’s friends (who I had met a few times) asked me about my daughter’s feeding tube. It was a welcome relief to standing off to the side with my daughter while all the other parents walked by us with those ‘sad eyes.’ However, there was also a time when some old guy in the grocery store (that I did not know) yelled (yes, I did say “yelled”) across the aisle at me to ask if my daughter’s glasses we real. That was not a welcome relief… to say the least.

So, should we ever meet, or if you have a friend or acquaintance whose child has special needs – go ahead, take the plunge and ask what’s on your mind. I know that there’s no way you will totally understand what we’re talking about (kind of like how I have no concept of potty training), but it’s a start. And for me, it’s like a bridge back to normalcy.

3 thoughts on “Are You Being Nosy or Showing Interest?”