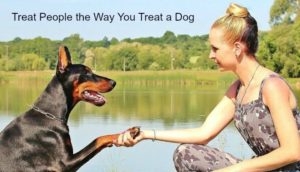 Think about how you approach a dog at your first encounter.  You approach him cautiously. You talk to him in a sweet voice. You extend your hand and give him time to sniff you out and get to know you.  That approach can teach you a lot about how to interact with people.

When you meet a dog and put out your hand for him to smell, you show you’re a friend and you’re letting him get to know you. Both you and the dog are curious about each other, but you give each other a chance to pick up on how each of you are feeling before you get too much into the other’s personal space.

Would you ever approach a dog for the first time by yelling at him? Or raising your hand as if to hit him? I hope not! (For your sake, and for the dog’s!) But by not being aware of both your tone of voice and your body language when interacting with other people, you can send the same aggressive, dismissive messages, no matter what words you’re saying.

So often, especially if you’re having a bad day or you’re short on time, you may say one thing: “Nice to meet you” or “This report is fine with me,” but if your arms are crossed when you say it and you’re looking around the room at everything except for the person you’re engaging with, you might as well be saying, “I really don’t have time for this!” or “I think this report stinks.”

Here’s another example of how we should treat people the same way we treat dogs. Have you ever been upset when someone doesn’t respond the way you think they should?

I have done a lot of rescue work with abused dogs, and in most cases, no one knows what’s happened to a lot of dogs that end up in a shelter. With some, I’ve figured it out. For example, with one particular dog, I knew that every time we got ready to go down the stairs, the dog would stop, and then start to back up. It didn’t take me long to realize he had been kicked down the stairs by a previous owner. So for months I carried this 80-pound dog down the stairs until he trusted me enough to know that when he was with me, he could walk down the stairs without fear.

The same holds true with people. If you’re not getting the response you’d expect from someone, maybe it’s because you’ve had a conflict with them in the past, and the person is still not sure how you’ll react – just because you’ve decided to turn over a new leaf, doesn’t mean they believe you yet. Or maybe the trouble is with a new colleague who has had bad experiences that you’re not aware of.

No matter if it’s a dog or a coworker, if you’re trying to build a relationship with someone who has been hurt, they lack trust. You have to be the one to continue to put the energy and effort into the relationship to get that animal or person to trust you enough to react normally again. Just keep in mind the law of patience – they’ll come around eventually.

When you engage with people in this way, you show them that you’re responsive to their needs, but that you’re also looking for a mutual sense of respect within the relationship. Remember – communication is the basis of every interaction. In your own relationships, do you think implementing more methods like this would increase your ability to connect?