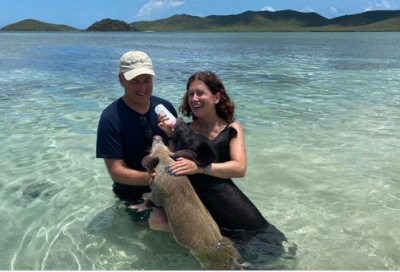 When we were on vacation recently in Antigua, we met a couple while lying on the beach who told us about an excursion called Pigs in Paradise where you could swim with pigs. Being the animal lover that I am, I decided we had to check this out before we left. On the last day of our trip, we went to Pigs in Paradise.

The woman who runs the attraction was telling us about the history of the pigs in Antigua. She shared that she rescued a few pigs from a farm that was closing. She rescued others when they “went into retirement” to live out their time on her farm.

Eventually, her brood became too much for her to take care of. She found it overwhelming to make sure they each got the needed amount of food, exercise, and attention. Locals would come out and help.

Seeing how much the pigs enjoyed it, the idea for Pigs in Paradise was conceived. Instead of being overwhelmed and financially drained by her devotion to these intelligent creatures, she turned a problem into an opportunity. Now people pay her to do the work that she needs to get done.

You see, we didn’t just swim with the pigs, she had us bottle-feeding them, telling us to make them “work for it!” We were not allowed to stop moving, you can see why by checking out my Instagram reel here.

She told us fun facts about pigs like they can run a seven-minute mile and have the IQ of a 3-year-old human child. She explained we must always feed the larger pig to protect the smaller ones from being attacked if they are seen as competition for the food. She had us race the pigs down the beach, so they got more exercise (they won).

By the end, the pigs had gotten exercise and food, the woman had earned some money, and we had fun swimming with the pigs and learned some new facts about them. It was a win-win-win situation that this woman’s creativity and ingenuity had birthed from what at first seemed like a big problem.

Her ability to transform her problems into wins blew my mind. It made me think about what things in my life I may be viewing as problems rather than potential.

What about you? What problems are you facing at work or in life that you can look at from a different angle? Rather than being overwhelmed or upset – see if you can find the opportunity awaiting you.