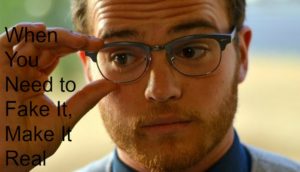 Sometimes we find ourselves in situations with people we simply don’t like, for whatever reasons. In nonprofessional settings these situations can be straightforward to deal with, because often all you have to do is just minimize contact with that person. In business settings, though, these situations can be more of a challenge. When faced with a difficult colleague, how do you change a contentious dynamic into a productive one?

For me, these challenges are often thorniest in the realm of performance appraisals. Almost as soon as I started managing direct reports in my career, I realized there would be times when I’d have to review troublesome colleagues who angered me because they were underperforming, or frustrated me because their poor social skills made it tough for everyone else to work with them. But how could I evaluate their performance in a way that would enhance the professional environment, not damage it?

My first full-time job was at an accounting firm. During my second year I was managing an auditing team that included a young guy named Kevin. And Kevin just didn’t get it. The demands of the project were intense and the time frame was tight, so it was important that everyone perform optimally. Still, at the end of each round of work there would be numerous tasks that Kevin had messed up, and the rest of us had to put in a good amount of extra time cleaning up after him. Needless to say, this made me extremely frustrated.

At the end of the audit I had to give Kevin a performance review. I was angry about the extra work he caused for me and others, but I couldn’t go into the performance review feeling bitter about him, because that would have demonstrated poor management skills and not contributed anything positive to the situation.

So what did I do? After much grappling and some sleepless nights, I finally found the good. I thought extensively about the conundrum of Kevin and realized that although he did have some deficits, if I was going to be honest, he also had some incredible strengths. He came to the office every day with a smile on his face, and he had established the best rapport of any of us with the client. If pieces of information needed to be procured, Kevin was always the first one to be able to get them. So I went into Kevin’s review with both the pluses and minuses of his performance in mind, and we were able to discuss them honestly.

Through this open dialogue we realized that there were things about his current situation that didn’t feel right for him, either, so we devised a work plan that would keep him in the company but get him trained in a department that was a better fit for him. We instituted the plan, and his professional life thrived. That was a powerful lesson for me. It taught me that an important part of being authentic is staying open to finding what makes others authentic as well.

Despite my initial resistance and doubts, I found a way to connect with Kevin’s authentic assets and strengths, and this benefited us both.

At times your first instinct when confronted with a tough situation is to fake your way through it, but this doesn’t make for a productive atmosphere. Being honest and positive is how you make a situation work in your favor, and remember that both of these traits must be present for the outcome to work. Being honest means you’re showing off your authenticity, while positivity is how you keep things productive and valuable.

Isn’t the world a better place when we’re all being open and supportive of one another?