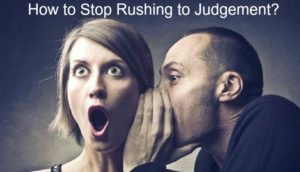 One of the most powerful ways to reduce misperceptions that others might form of you is to stay open to how you are shaping your perceptions of them. If you rush to judgment about someone, chances are that person may have the same reaction to you. Monkey see, monkey do. If you don’t want people to make assumptions about you that they automatically consider as facts, be aware of not falling into the same habit. In other words: Stay unconvinced.

It is natural for us to form first impressions when we meet someone. The challenge is to remain open to letting the other person change. All too often we jump to conclusions, but the next

time you find yourself forming perceptions too quickly, stop and ask yourself, ‘‘How else can I interpret that person, that action, that situation?’’ People often act based on what they expect someone else’s reaction to be. You can change the outcome of a situation by keeping an open mind and not pigeonholing other people into what you already believe about them. Lead by example, and let it be clear that your perceptions continue to take shape as your connection with someone progresses.

After Erica and I unexpectedly bonded during spring break, I thought back on how I’d acted toward her before our trip. I realized that since I had already decided she was a stuck-up rich girl, I probably hadn’t acted very kindly toward her. In fact, if I was honest, I had treated her exactly the way I thought she was treating me, with thinly veiled contempt. And as my dad would have said, ‘‘The world is a mirror.’’ What I got back was the same frostiness I was giving off. Had I remained open to other interpretations of her behavior, I could have had a great friend even sooner.

More recently I coached Liza, a new manager in her early thirties. She voluntarily shared her feelings with me about one of her colleagues, a woman named Drea, who was also a new manager as well as the mother of a toddler. Liza always felt that Drea was unfriendly. After a few attempts to chat with her, Liza concluded that Drea had no interest in being friendly, so she stopped making an effort.

One Saturday afternoon Liza ran into Drea in the town where they both lived, and they wound up sharing more during those fifteen minutes of chatting on the street than they had in the previous year they’d worked together. It turned out that Drea was having problems with her son and, consequently, feeling overwhelmed by work. That conversation broke the ice. Liza was able to appreciate the pressures Drea was under outside the office, pressures that contributed to her seeming closed and unapproachable, and Drea felt relieved to have her colleague understand her very taxing situation. The two women wound up not only becoming friends, but finding ways to collaborate at work, building on their new appreciations for one another, and becoming even more productive at work in the process.

You never know what else is going on in somebody’s life. If you jump to conclusions about someone based on limited, proscribed interactions, you close the door to the possibility of deepening your connection. Whether with a new acquaintance or an existing relationship, stay open to the possibility that your perceptions aren’t entirely accurate; it just may give you the opportunity to strengthen a bond.