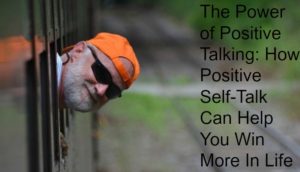 We all talk to ourselves, and when we keep telling ourselves some- thing we eventually begin to believe it. This is such a fundamental truth that psychologists have come up with a clinical term for it: self-talk. The concept has proved particularly useful in the field of sports psychology, and numerous studies have shown time and again that the differences between negative self-talk and positive self-talk have everything to do with how athletes perform.

Negative self-talk can naturally arise when encountering obstacles, as we all know, and professional athletes are no exception to this rule. But learning how to transform these harsh thoughts into self- encouragement and positive self-talk is what makes the best athletes succeed.

Thoughts such as ‘‘I’m no good at that,’’ ‘‘I have nothing to offer,’’ ‘‘It’s too hard, I can’t do it,’’ and ‘‘If I try it, I’ll look ridiculous’’ become true when you play them over and over in your head in a nonstop loop. Others pick up on and believe what you project and believe about yourself. To increase your authentic likability and forge successful connections, harnessing positive self-talk is key. And the only one who can do that is you.

The tricky part is that, for some people, this is a hard thing to do. Some people have learned to beat themselves down instead of building themselves up, and this forms such a habit that it gets to the point where they don’t know how to be positive with themselves anymore. It’s okay – as the saying goes, even old dogs can learn new tricks. You have resources available to help you start reclaiming your positivity again.