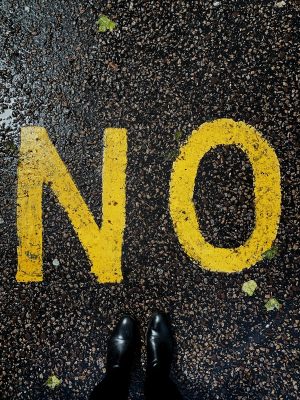 Saying no can be tough. We feel guilty or unhelpful or a myriad of other nonhelpful emotions that have us saying yes to things we really want and ought to be saying no to.

Whichever answer you decide on, neither of those answers should be one-word responses.  One of the mindsets of a Connector is that Connectors are Conscientious.  That means they do what they say they are going to do.  It also means they are selective about what they will say yes to.

My husband had a sticky note on my computer with the word “no” on it. It stayed there over a year until it fell off. I left it there because it reminded me that No was a possible answer. In a way, it gave me permission to say no.

I still remind myself that saying no is saying yes to something else. I often focus on what I will say yes to instead to make it easier to say no. I had to learn how to say “no” and have it heard. Eventually, No became a word that was a little easier to use when I incorporated the strategies below:

Instead of giving a straight, “No”, try using, “No, but…” in your responses. “No, but this person may be interested,” or, “No, but this resource may be able to help you.” Not only does it allow you to say yes to something else, but this helps the person making the ask to find another way to get the help they need. By saying no, but then following up with a person or resource who may be able to help them, you’re both sticking to your own boundaries, and creating connections between two other parties that need it.

Whenever I say “no”, I look to give an opportunity for a yes later. For example, I may say, “No, but if you have a larger audience and a local venue?” or, “No, but please reach out for next year’s event!” This prevents the doors of communication from completely shutting, but keeps you from over-committing yourself, and lets the other person know it’s not them you’re rejecting, just the current timeline or circumstances.

“Yes” isn’t a complete, one-word answer either; managing expectations and letting people know where you stand is an important part of making sure you don’t get burnt out or feel like you didn’t mean to commit to such a large “yes”. Using, “Yes, if…” allows you to protect the parameters you need to complete the ask successfully. It may look like, “Yes, if we can reprioritize this other thing,” or, “Yes, if you can provide an additional resource.”

Sometimes the answer is yes, just not yes right now. Using, “Yes, after…” lets the person know you want to help, but other priorities and tasks need to be met first. Saying, “Yes, after my vacation”, or, “Yes, after this big project is finished,” gives you the breathing room you need to keep all commitments.

Sometimes, we get asked to do something we genuinely don’t have the tools for. If it’s an opportunity you want and are excited about, use, “Yes, with…” or, “Yes, with training,” or, “Yes, with your assistance.” This is a great way to learn a new skill and grow while letting the person know what your own abilities are.

Is saying “Yes” and “No” something you’ve struggled with in the past? Which of these strategies can you start using? Let me know!

I shared this advice on how to learn how to say “no” and have it heard in this Big Think video. Watch it here!