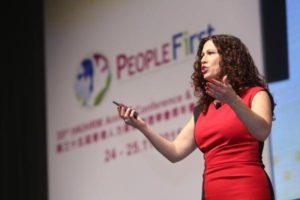 Did you know that the #1 fear across society is public speaking? Death and snakes round out the top 3. Would it surprise you to know that when I was teenager, it was my biggest fear, too?

Seriously. It’s true. It’s shocking to me that I eventually made a career out of giving a speech when I wouldn’t even run for student council because it would entail doing that very thing. The idea of giving a speech in front of my classmates made me want to throw up. I thought, “Why would anyone opt in for something like that – it sounds like torture!”

So when I was a junior in high school, I took my first public speaking class. I wanted to face the fear. Signing up only exacerbated my fear. I’ll never forget the feedback my teacher gave me after a speech. He said:

If you had asked me then what I thought I would do with my life, my answer would never have been public speaking. It would have been somewhere along the lines of a corner office business woman in finance. Yet here I am, about to speak in front of 2,000 people at Toastmasters International!

Not only did I get over my fear of public speaking, but I actually came to enjoy it. You should know, I still feel nervous every time and I’m absolutely terrified for my largest crowd yet — but at the same time, I know I will do great.

If you relate to any of these public speaking phobias… don’t be afraid of the fear, embrace it. Use the fear and harness the adrenaline. Challenge yourself and trust that you’ll be great, too. ​​​​​​​

​​​​​​​Maybe you also have a fear of public speaking, or maybe your fear is something else. Whatever it is, face it. You’ll get past it and it will open up new opportunities that you never imagined!