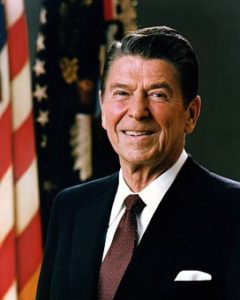 We’re in the thick of the race for the GOP nomination and the personality style of the candidates is often discussed more than their stance on the issues. This got me thinking about the importance of likability when choosing a candidate. And I asked myself, “Does a likable politician equal a good politician?”

If you think back, one of the most liked presidents was Ronald Reagan. Why was he so popular? I think it was because he was able to connect with people. He looked into the TV camera and made all of us at home feel like he was speaking directly to us. Is this an important quality for a world leader? Well, it certainly seemed to help Reagan. Did it make him a good president? I’m not sure. Scholars still debate over his political legacy.

Barack Obama is extremely relatable which helped make him electable. Whether he’s breaking into song or chatting up a late night talk show host, President Obama comes across as a likable guy that most people can relate to. It’s actually pretty easy to imagine him relaxing with friends over a round of beers (thanks to the infamous beer chat a few years back). Yet his approval ratings are frequently less than 50%.

As for the current GOP candidates, Newt Gingrich’s likability goes up and down. His candor and apparent speaking off the cuff – what some people like most about him – can sometimes land him in trouble. This authenticity, Law #1 in my book The 11 Laws of Likability, is the foundation of likability. However, when your authenticity expresses a ‘love me or leave me’ attitude, you can come off as polarizing – which might not get you elected. An outspoken friend can be charming and bold, but a political candidate who speaks before thinking and has the power to impact billions – can be just plain scary.

If Newt is authentic, then how would we describe Mitt? Well, he’s dependable, old-fashioned and decent. All good qualities, right? Sure, unless they translate into ‘boring.’ A leader must energize and ignite action to have an impact.

For me personally, a likable politician is someone who gets along with others, is relatable, trustworthy, and can make tough decisions. This last one often precludes a politician from worrying about being likable. At the end of the day, there’s no question that likability has a (whole) lot to do with winning elections but maybe not with being a good politician. What do you think?

Want to read more? Here’s an article on the ‘likability’ of a current GOP candidate: http://bit.ly/IgSgxu