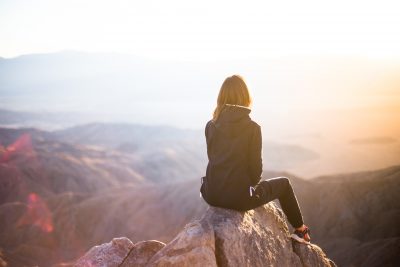 Have you ever gotten in your head and over analyzed a situation? I see it happen often during the job interview process. I’ll never forget one former NYU MBA student who I coached on the interview. As soon as he started the mock interview, he put on what I call the Interview mask.  The persona that you think the future employer is looking for.

I even tried to trick him into not knowing that he was being interviewed, but as soon as he realized it he went from being a normal human in a conversation to a robotic “I am now a candidate, I am interviewing” and stiffened up. His whole demeanor changed from relaxed to extremely ridged, he lost his smile and interviewing became painful not just for him but for the company to figure out who he was.

I did a screen test for the TV show and thought it went well. Then I got in my head. I started thinking maybe they want more of a personality like Judge Judy or I needed to be edgier. I did two more screen tests and let’s say the third one wasn’t my best.

A few days later I found myself at a conference talking to Kevin Jonas who had just appeared on Celebrity Apprentice. I asked him if he had any advice about reality TV. And he gave me the perfect answer, “just be yourself.”  You would think someone who wrote a book founded on the Law of Authenticity wouldn’t need this reminder – but clearly I did.

This in-authenticity often rears up when something is important to us; sometimes it is hard to stay our authentic selves. Here are a few ideas to help you (and me) next time you want to put on the “mask.”

So what happened you wonder? Well I finally understand the saying at the Oscars, “It was an honor just to be nominated!” I didn’t get the role.

Don’t be sad for me, I have a call with the casting director next week – I am following tip #5.  I also had someone else approach me for a different TV project. By following tip #4 I already made the cut and we are on to the next phase.